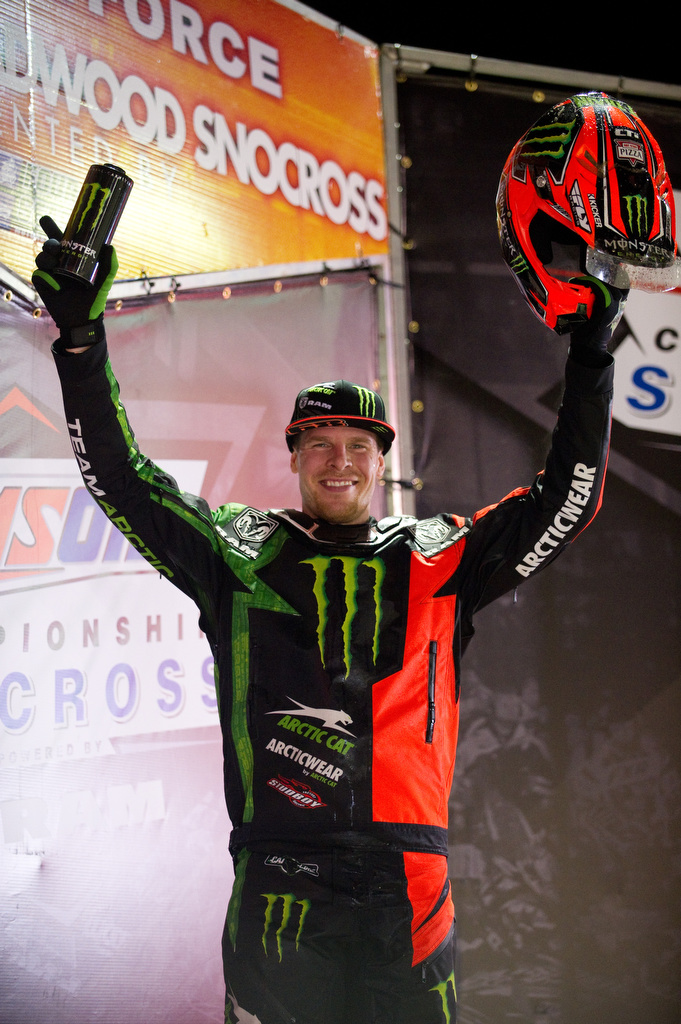 Monster Energy / Arctic Cat / Ram Trucks’ Tucker Hibbert was on fire at the ISOC National Snocross Deadwood Shootout in Deadwood, SD. The first time in his career, Hibbert won all four qualifying rounds and both final events at Days of ‘76 Rodeo Grounds.

In four years of racing on Deadwood’s sub 30-second bullring style track, Hibbert has put on some of the most impressive wins seen in the history of the sport. With the memory of his jaw dropping come-from-behind win en route to his 100th victory last winter, a sold out crowd packed into the rodeo grounds looking for another show.

Both Friday and Saturday night through qualifying and the finals, bad startline picks and poor starts didn’t faze Hibbert. To the delight of the sold-out crowd, no matter how rough the course got or intense the snow roost was, the nine-time champion battled his way to the front every time he hit the track.

Hibbert now has a 66-point lead in the 2016 ISOC National Snocross Pro Open Championship chase. Next up is X Games Aspen where he’ll compete for a record ninth consecutive gold medal. The event will be broadcast live on ESPN3 and watchESPN.com Thursday, January 28 6-7:30 p.m. ET.

“This weekend was huge for me and my team. I knew we were in a good place coming into the event but it’s always challenging racing on a track like this. No matter what challenge was thrown at us this weekend, we found a way to get the job done. Even though I’m not a big fan of racing on this track, the fans make it worth it. They were crazy and kept me pushing all weekend. It feels so good to come out of Deadwood with the sweep and ready to battle at X Games this week.”