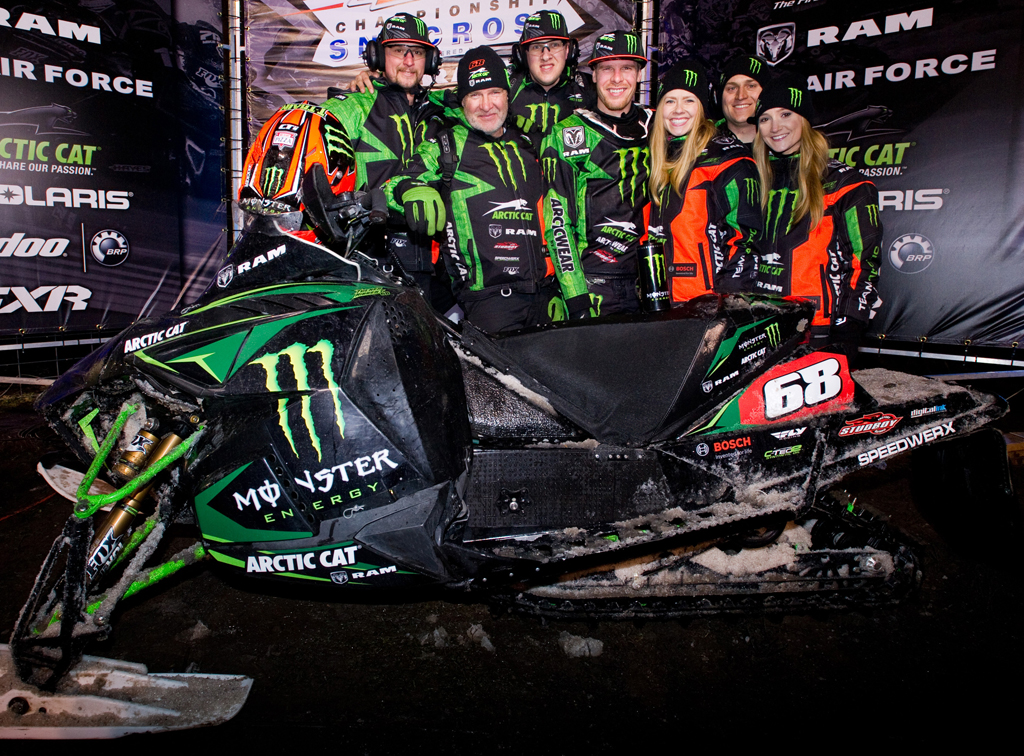 Hibbert went 1-2 in his qualifying rounds Friday night, making him the number one qualifier for the final event. With ISOC’s new inverted start procedure, he was awarded the final spot on the front row of the 15-rider start line. He got a solid jump but immediately backed off to avoid getting pushed wide in the tight, first corner of the track. Finishing lap one in 11th place, he spent the next 19 laps making passes on a near impassable track to finish fourth.

Saturday, with track conditions continuing to deteriorate, Hibbert struggled in qualifying. Known for his ability to move through the field on any track, he had a hard time making passes while battling poor visibility from the heavy, wet snow roost. Getting out front early in the final would be key to take the top spot of the podium that night.

In the 15-rider, 26-lap final, he rounded the first turn in third place and avoided getting collected in a collision on the front stretch that took out the front two riders. With a clear track in front of him, he pushed hard to cushion his lead early before getting into lappers. Riding smart, he held on to take his 110th pro national win.

Hibbert has a three-weekend break before hitting a busy swing of races in January. For more information on his schedule, visit tucker-hibbert.com.

“I’ve been racing for a long time and I’m not sure if I’ve ever raced in such poor conditions. Because the snow was so wet and sloppy, the roost was relentless. Even out front, I got roost off my ski tips making it almost impossible to see. I was constantly slowing down to wipe my goggles. I know everyone was battling the same issues but, man, it was bad.”

“I think I made it pretty clear Saturday night on the podium how I feel about the new qualifying rules. It’s a mess and I don’t believe it’s right for our sport.”

“I’m putting the weekend behind me and focusing on what’s ahead. We have a few weekends off before things really pick up. January is a big month with two ISOC events and X Games. It’s no secret that we (the team) put a lot of focus on X Games and this year is no different. I’m excited to keep cranking in the shop and spend more time at the test track before we hit the next stretch of races.”