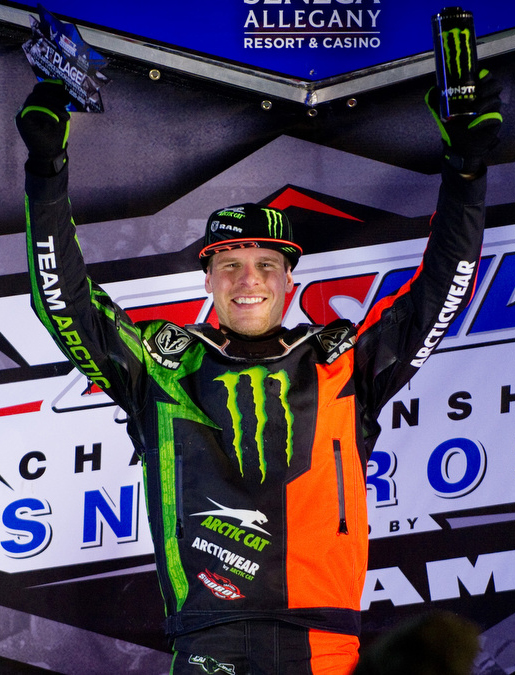 Monster Energy / Arctic Cat / Ram Truck’s Tucker Hibbert continued his win streak in New York by sweeping rounds nine and 10 of the ISOC National Snocross tour. Hibbert pulled the holeshot nearly every time he hit the track to win all four of his qualifying rounds and both Pro Open finals.

Seneca Allegany Resort and Casino featured a high speed, technical track and with warm temperatures throughout the weekend, snow conditions constantly changed. Hibbert adapted quickly to each condition and put down blistering fast laps both nights. His most impressive run came in Saturday’s 18-lap Pro Open final where he opened a five-second lead over second place by lap five and went on to lap up to fourth place before taking the win.

Hibbert now holds a 90-point lead in the 2016 championship title chase. The ISOC National Snocross tour will take a two-weekend break before hitting the final three events of the season. For more information on Hibbert’s schedule, visit tucker-hibbert.com.

“I really couldn’t have asked for a better weekend. This is the second national in a row we [the team] have been able to sweep qualifying and the finals. These weekends don’t come easy, especially now with the inverted start. Even with bad start line picks in my qualifying rounds and finals, I was able to pull almost every holeshot. That’s a testament to how good the guys have my sled dialed-in right now.”

“The track changed a lot throughout the weekend. The snow went from slippery to mealy to icy. It was tricky and really kept you on your toes. There were a lot of crashes throughout the weekend. It just wasn’t a track you could take chances on. I’m thankful I got good starts so I didn’t have to push past my comfort zone to get to the front.”

“Every year in New York, I’m blown away by how passionate the fans are. You don’t see that at any other event of the year. It’s fun to race in that kind of environment.”

“We’re deep into the season and I feel like before we know it, we’ll be at Lake Geneva. It feels good to have a good points lead I but try not to focus on points too much. With so many points on the line each weekend, you have to stay focused and not get ahead of yourself.”