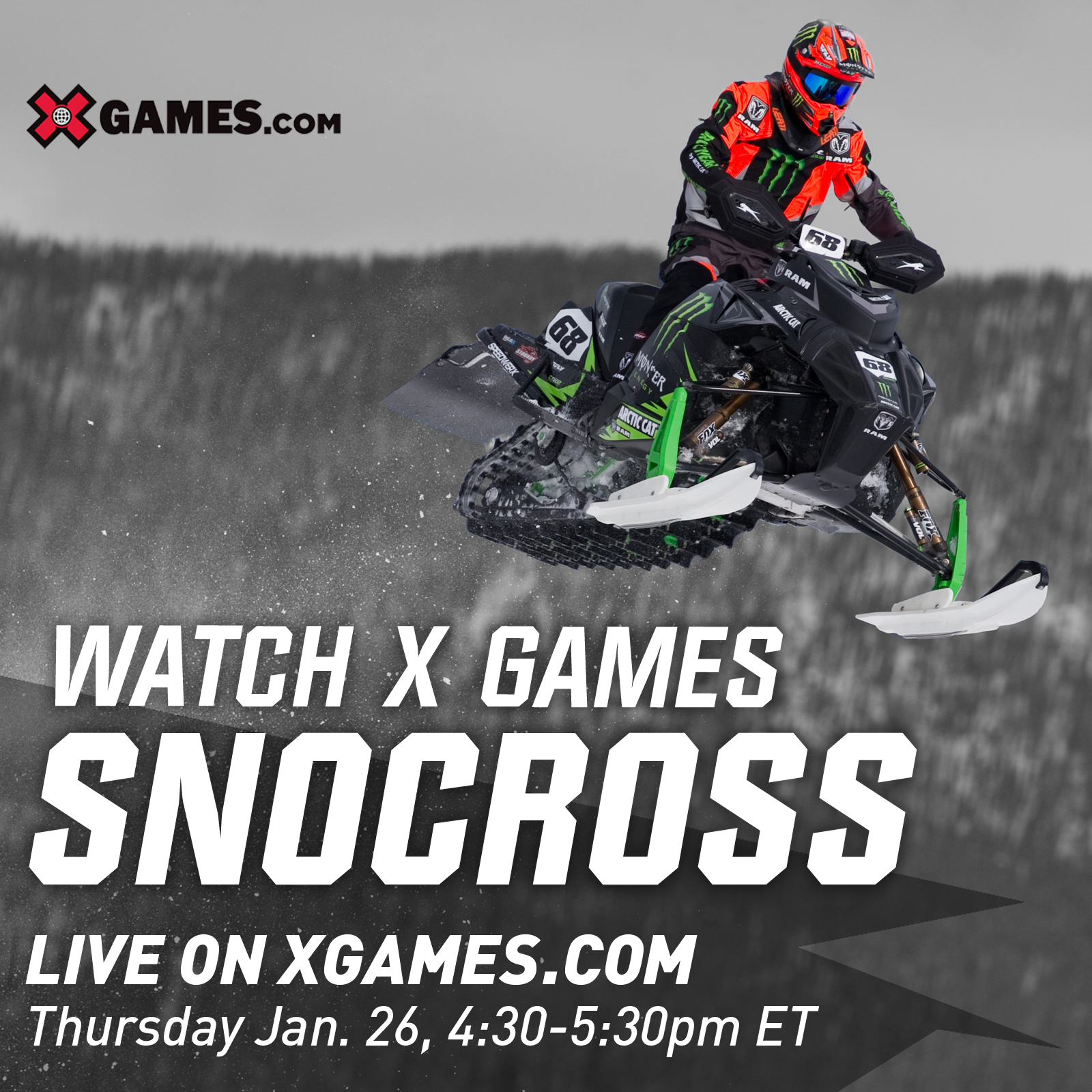 Watch Tucker Hibbert race for his 10th consecutive X Games gold medal Thursday, January 26 4:30-5:30 p.m. ET live on xgames.com. There will be two heats of qualifying with the top four in each heat advancing to the eight-rider final.

The event will be delay broadcast on ESPN Sunday, January 28 at 2 p.m. ET. 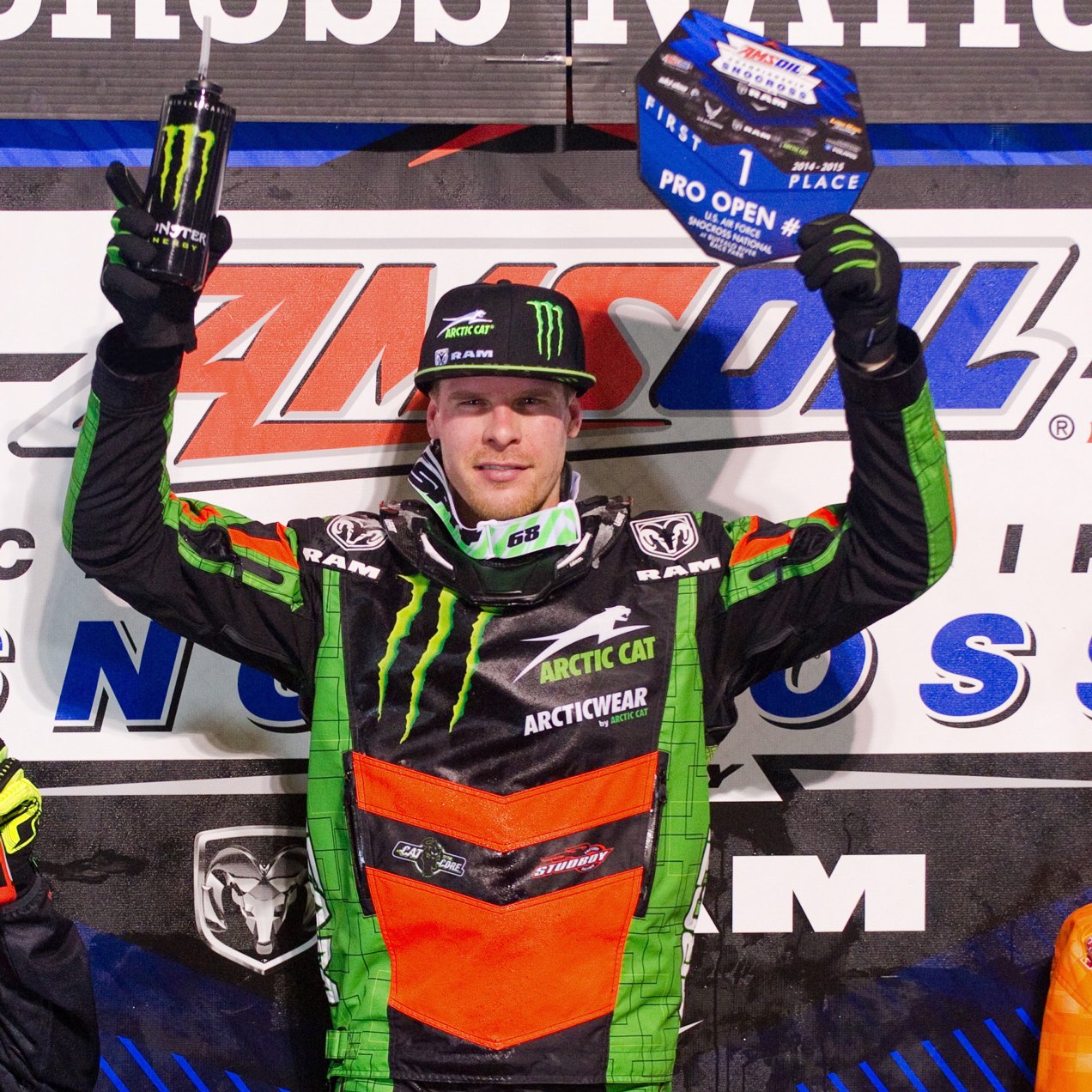 Hibbert had a relatively uneventful night of racing Friday as he convincingly won both qualifying rounds and the final event. Saturday proved to be another story. With temperatures creeping up to the mid-40s Saturday afternoon, the sub 30-second track quickly deteriorated, creating difficult and unpredictable race conditions.

Hibbert went 5-4 in Saturday’s qualifying after two separate incidents left him off his sled and fighting for positions. With a seventh place start line pick for the 15-rider, 23-lap final, he got a solid jump off the line and railed the outside of the first turn to secure an impressive third place start. He pushed hard on the opening laps and quickly took over the lead. With a clear track in front of him, he rode nearly flawless. After pulling a 12-second gap over second place, he backed down and rode cautiously to the finish.

With Hibbert’s victories at the Fargo National, he’s on track to claim his 100th Pro National win at Canterbury Park in Shakopee, Minn. Jan. 9-10. Follow him as he prepares for this career milestone by visiting www.tucker-hibbert.com and connecting to his social media sites.

“It was difficult racing conditions all weekend. Small tracks really make us (the racers) push hard. I’m not a big fan of tracks like this. The snow conditions magnified how difficult it was. Everything the sled does, it does it more aggressively in wet, heavy snow. It’s really hard to not make mistakes and get the sled to go where you want it to.”

“I had two big mistakes in Saturday’s qualifying. The first one with Corin (Todd) was scary. He had a small bobble on the face of the big finish line jump which slowed down his speed. Our lines crossed and I landed on the back of his sled causing us both to go down. Thankfully we weren’t seriously injured. The next race, I was leading and when I landed off the same jump, my sled just stuck in the heavy wet snow and I got ejected.”

“When I got on the line for the final, I put the entire race out of my mind and focused just on the start. Once I got through the first corner clean, I refocused on the race. I need to thank my team and Speedwerx for getting my sled dialed-in because it worked. I had to make a couple passes but once I got in the lead, I was able to find new lines and ride the track the way I wanted to. When I started to get into lapped traffic, I backed it down to make sure I could finish without any issues.”

“To be at 99 wins and going for 100 is really cool but it’s just another race. When we (the team) make it happen, obviously it’ll be exciting but the main goal is just to keep winning races and building up points to win the championship at the end of the season.”

Tucker Hibbert will enter his 15th professional snocross season with a proven program focused on success. With the same core crew members and a familiar sponsor line-up behind him, Hibbert is in a solid position to defend his ISOC National Pro Open title, continue his X Games Aspen gold medal streak and claim his 100th Pro National victory.

For the 2014-2015 season, Hibbert will compete under the Team Monster Energy / Arctic Cat / Ram Truck banner. Monster Energy will continue to lead the program as the title sponsor with Arctic Cat providing factory support with its potent 2015 ZR 6000R SX. In addition to returning as the official truck of Hibbert and his crew, Ram Truck will be added to the team name.

“My program is solid – from my equipment, to my crew, to each and every sponsor that stands behind us. We’re all passionate, competitive and dedicated to doing our best. I couldn’t ask for a better group of people in my corner.”

“Last year was unreal but I know there’s still room to improve. That’s the best part about racing – it’s constantly evolving. My team and I never stop testing or fine-tuning because that’s what it takes to stay on top. We have another big year ahead of us but I know we’re prepared and ready for the challenge.”