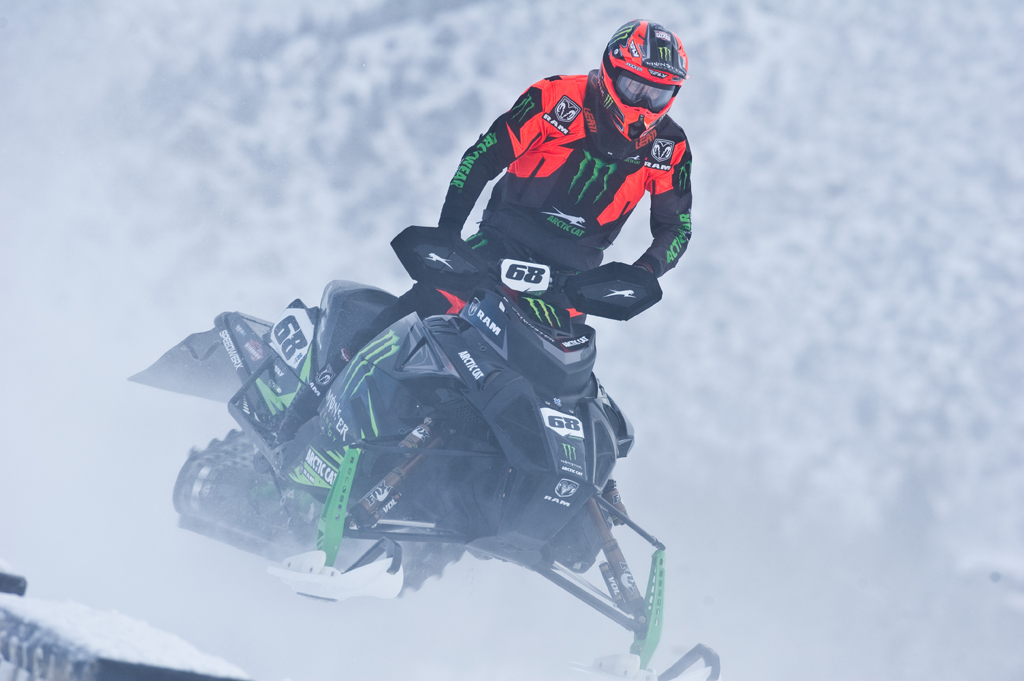 January 27, 2017 – Monster Energy / Arctic Cat / Ram Truck’s Tucker Hibbert finished fourth in the Snocross event at X Games Aspen 2017, breaking a gold medal streak he’s held since 2007. The 14-time medalist was fast in practice and qualifying but came up short in the final.

Typically known for its big-air, technical snocross tracks, X Games featured a short track this year with lap times hovering around the 19-second mark. Throughout the race day, the track developed into an icy, one-line course making the holeshot even more critical for a top finish.

In Hibbert’s qualifying race, pileups off the start in the tight, right-hand first corner caused officials to restart the race twice. On the third start, Hibbert was third off the line. In lap six of 15, he made the pass for second and held that position to the end of the race.

In the eight-rider final, Hibbert got a solid jump off the line and made it through the first corner clean to round lap one in fourth place. He pushed hard for 30 laps, looking for a line but struggled to find an option for a clean pass to finish the race where he started, in fourth.

Next up for Hibbert is the fifth stop of the ISOC National Snocross tour in Salamanca, New York. For more information on his schedule, visit tucker-hibbert.com.

“I’m proud of all the hard work my team and myself put into this event but disappointed in how it ended. Winning at X Games is always a top priority for us.”

“I felt I was riding good but didn’t get great starts which made it really difficult to get the win. It was definitely disappointing to have a really small, easy racetrack compared to previous years at X Games. The short, tight start caused a lot of chaos and pretty much determined the race. Obviously, I had the same opportunity to get a better start and to win the race but it didn’t work out that way. I’m putting this one behind me and focused on the rest of the season.”