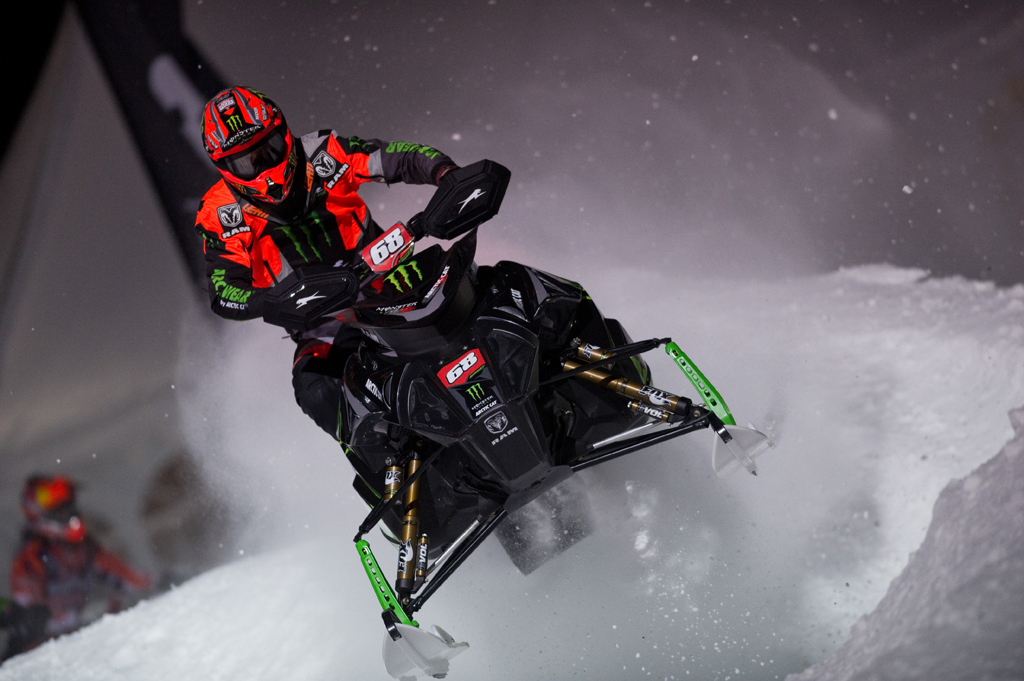 Heavy snow and high wind gusts forced officials to shorten Friday night’s final from 16 to 12 laps. After an 11th place start in the 15-rider race, Hibbert had a tough road to victory. He wasted no time to start moving through the pack, making many of his passes on the steep uphill section of the track. With five laps to go, he took the lead and continued to lay down fast laps to finish nine seconds ahead of second place.

Weather once again proved to be a major factor Saturday night with sub-zero temperatures creating heavy clouds of snow dust. Knowing visibility would be limited, Hibbert put extra focus into a strong start. He pulled third off the line in the 15-rider, 15-lap race and within in two laps, moved into first. With a clear track in front of him, he opened a 13-second gap over second place and rode smart to the finish to complete the weekend sweep.

Next up for Hibbert is the third stop of the ISOC National Snocross tour in Shakopee, Minn. The Canterbury Park National will feature three days of racing to include the fog make-up race from the season opener in Duluth. For more information his schedule, visit tucker-hibbert.com On his success at the Colorado National:

“I entered the race weekend confident in my preparation and wanting to win. Getting more time on the sled got me comfortable and feeling good again. I got in a decent amount of riding before Duluth but not enough. The team worked really hard to get my sled dialed-in and when you get everything working together the way it should be, that’s when you have successful weekends. That’s exactly what we were able to do in Winter Park.”

On the challenges of racing at altitude and on a clockwise track:

“I think when things are different, I seem to adapt and overcome challenges as good or better than the other riders. That has a lot to do with my experience. I’ve spent a lot of time in Colorado riding, training and racing. I’m comfortable racing at high elevation and know both my fitness and equipment will be tuned-in.”

“It feels awesome having success and taking the points lead right before Christmas break. The race schedule really ramps up in the new year so it’s a good position to be in.”