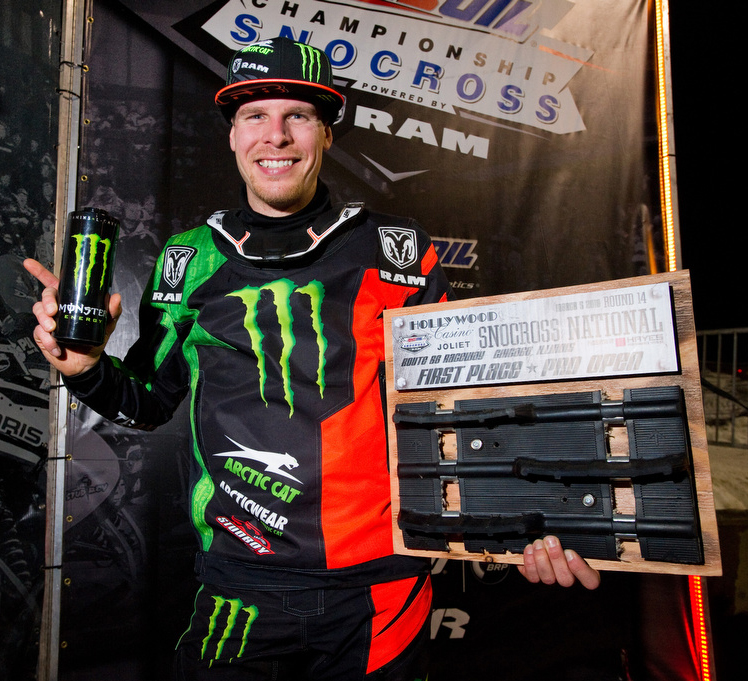 With a short starting line leading into a flat first turn, getting a good start was critical. Poor qualifying picks both nights put Hibbert at an instant disadvantage. Making the best of the situation, he went 2-1-7-2 in his four qualifying rounds.

Friday night, Hibbert looked to be on his way to a win as he quickly moved through the field after a mid-pack start in the 15-rider, 20-lap final. Searching for a line around leader no. 837 Ross Martin, he made a mistake and high-sided his sled. He got going again but struggled to find a groove to finish fifth.

In Saturday’s final, Hibbert qualified ninth but had first pick on the start line due to ISOC’s inverted start rule. On the far inside, he launched off the line and by the end of the backstretch rhythm section, he secured the lead. With a clear track in front of him, he pulled a solid gap over second place. He spent the remainder of the race riding smart on the deteriorating track while dodging downed riders and yellow flags.

Hibbert now holds a 97-point lead in the Pro Open points championship. With three days of racing and 147 points on the line at the final event of the season in Lake Geneva, Wisc., he has the opportunity to clinch his 10th national title on day one.

“The Chicago track was wild. I was surprised by the amount of snow they had and I’m pumped they were able to make the race happen with such warm weather. The track was really technical and the backstretch was tough all weekend. I was pretty disappointed about my mistake in the final Friday night and really motivated to get the win on Saturday.”

“The track Saturday night was really technical. A lot of riders struggled and ended up crashing. I’m glad I got out front early and was able to ride my own race.”

“I am really proud of how my team has been working and the season we’ve had so far. I can’t wait for the last race in Lake Geneva and finishing the season off strong!”