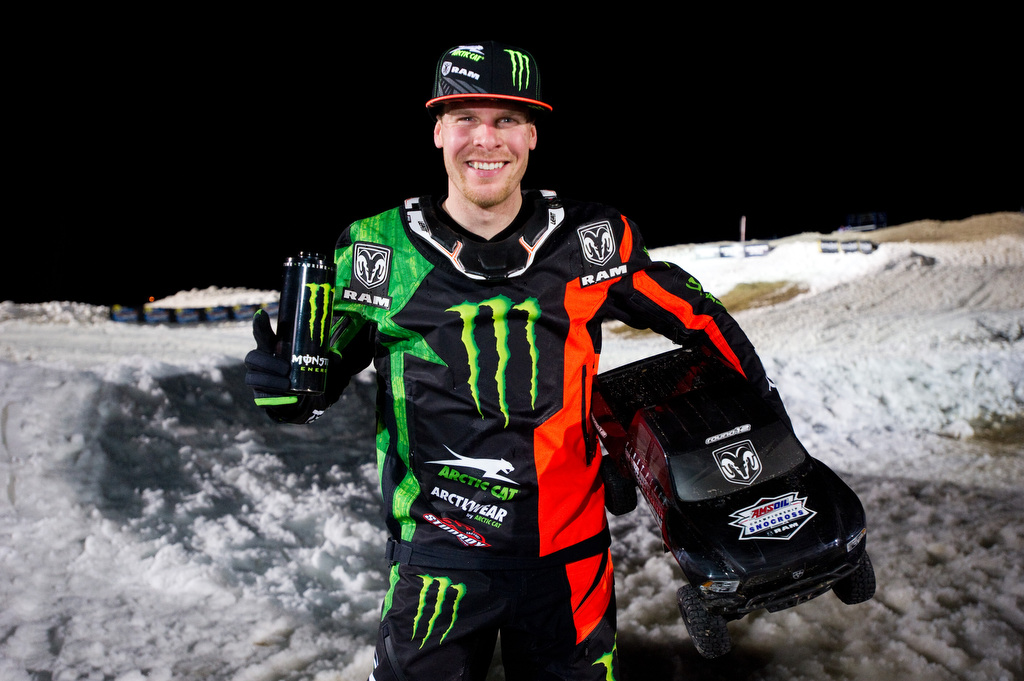 Monster Energy / Arctic Cat / Ram Truck’s Tucker Hibbert took double wins at the Ram Trucks Snocross National in Mt. Pleasant, Mich. to continue his win streak on the ISOC National Snocross tour. Hibbert is now 10-for-12 in the Pro Open class this season and holds a 102-point lead in the 2016 championship chase.

Hibbert was in top form Friday night winning both his qualifying rounds and the final.

After poor starts in both his qualifying rounds Saturday night, Hibbert had a hard time moving through the field to take a pair of fourth place finishes. The defending champion admitted to struggling in the sloppy, slippery snow and not feeling comfortable taking chances while getting blasted by heavy, wet snow roost. He knew getting a solid start could make or break his run for the win in the final.

In the 15-rider, 18-lap final, Hibbert launched off the start line only to miss grabbing the Stud Boy Holeshot by inches. Hanging close behind frontrunner #54 Petter Narsa in the opening laps, he searched for a line to make the pass. On lap five, Hibbert got a fast run on outside of the downhill rhythm section, snuck to the inside of Narsa at the bottom corner of the hill to make the pass. Once out front, Hibbert went unchallenged to complete the weekend sweep.

Next up for Hibbert is the penultimate event of the season. For the second consecutive year, Route 66 Raceway, right outside of Chicago, will transform its famed drag strip into a snocross course. For more information on the event, visit route66raceway.com.

“The track and snow was pretty good on Friday but on Saturday with it warming up, the snow got real slippery and unpredictable for racing. It was tough to be consistent and get traction. The roost was really bad.”

“On Saturday, I struggled through qualifying with my starts and dealing with roost from other riders. I was really focused on my start in the final. I picked what I thought would be the best spot to get the holeshot and it worked out pretty well. I was trying to get into the lead as soon as possible. I didn’t want to wait any longer than I had to. I was getting roosted really bad so I knew I had to get out front to get clear vision.”

“I feel really good. With all the wins and big points lead it takes pressure off for the last two races of the season. I’m focused on finishing the series strong, rack up more wins and get the championship.”