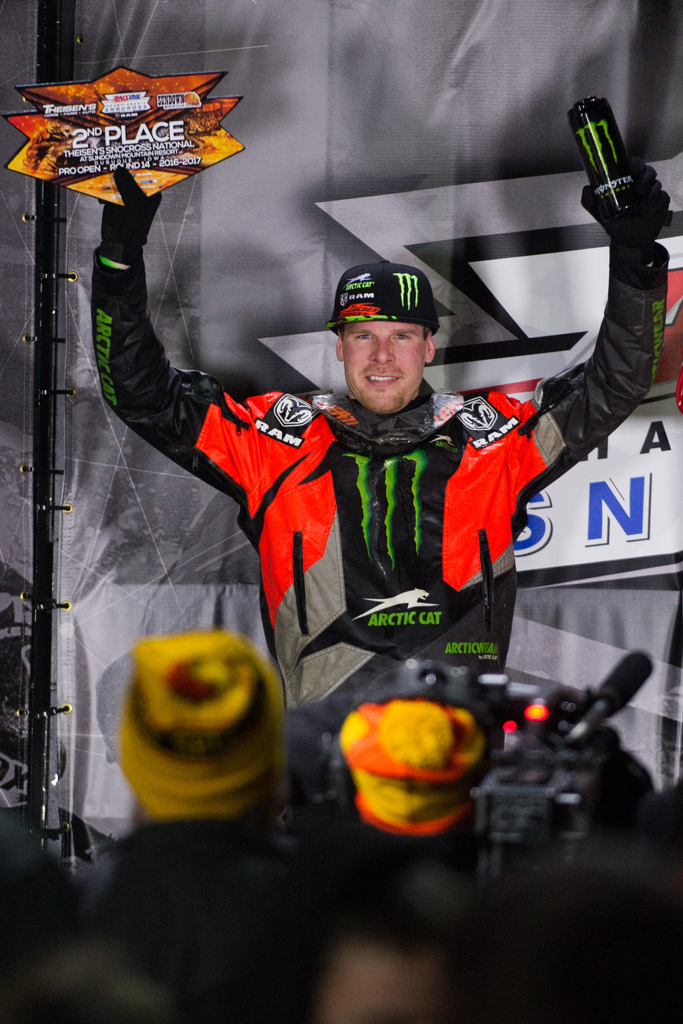 Friday night, Hibbert went 3-2 in qualifying and finished fifth in the final. The defending champion turned things up Saturday night finishing 1-3 in his qualifying rounds and putting on an impressive charge in the final.

With a 10th place start in Saturday’s 18-lap, 13-rider final, Hibbert had his work cut out for him. Dodging carnage early in the race, he rode smart while pushing forward. He moved into fourth place on lap four but already trailed the leader, #53 Kody Kamm, by nine seconds. Hibbert started making big gains halfway through the race by turning laps one to two seconds faster than Kamm. On the final lap, he closed the gap and was within striking distance of the lead but came up short to finish second.

Next up for Hibbert is the final event of the season in Lake Geneva, Wisc. March 17-19. He currently sits third in the 2016/2017 Pro Open championship and 44 points out of first place. With three days of racing and 177 points on the line, he’s still in the hunt to claim his 11th pro national title. On his performance at the Iowa Snocross National:

“I’m happy to get a podium finish in Iowa. I struggled a little bit on Friday but felt better Saturday. I felt like I rode a good race Saturday night – working my way through the pack but came up short.”

On racing at a new venue:

“It was exciting to see all the fans who came out to the race. It’s always fun to go to a new venue and see the excitement of fans. Everyone seemed really happy to have a race in the Dubuque area so hopefully it’s an event that can continue.”

On his position in the points championship:

“The plan is the same as always – stay focused on winning races. It’s going to be challenging to climb to the top of the points but we’re doing everything we can to put ourselves in the best position to have a shot at winning this championship.”