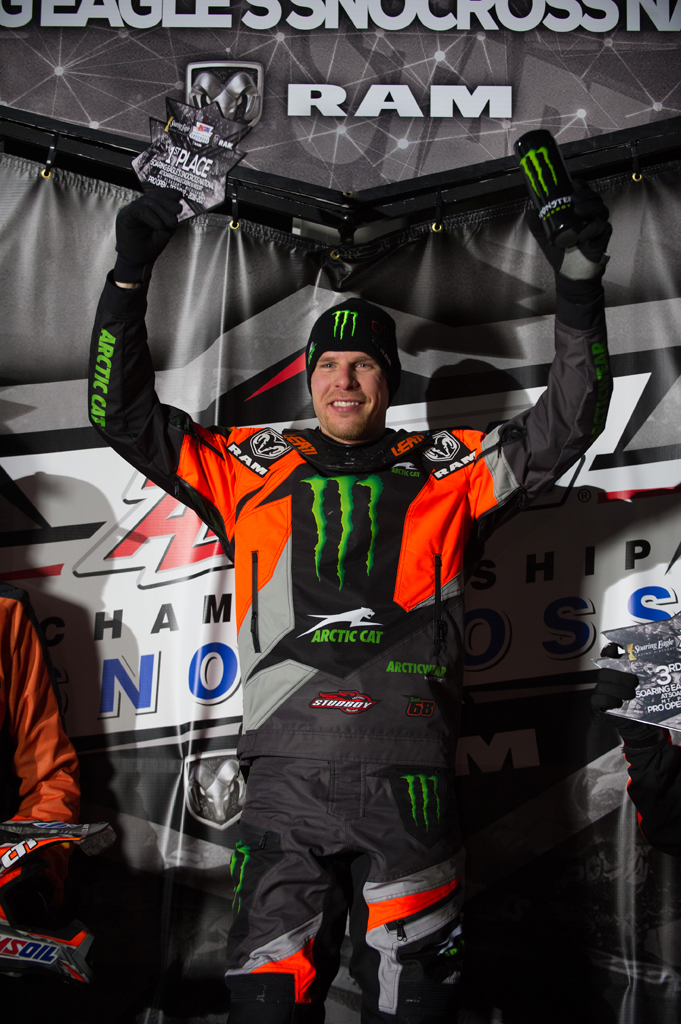 February 27, 2017 – Monster Energy / Arctic Cat / Ram Truck’s Tucker Hibbert had a dominating performance on the second day of the ISOC National Snocross Michigan National in Mt. Pleasant, Mich. Nailing the holeshot nearly every time he was on track Saturday night, Hibbert rode with confidence and control to win both his qualifying rounds and the final event at Soaring Eagle Resort & Casino.

Friday, the story of the night was the brutal track conditions brought on by unseasonably warm temperatures and intermittent downpours triggered by a thunderstorm that rolled through the area. The event went on but featured condensed racing, with laps cut from qualifying and the final. Hibbert charged hard in all his races but with mid-pack starts, he came up short to finish 2-3 in qualifying and fourth in the final.

Feeling good about his rides Friday night, Hibbert entered Saturday focused on winning. He grabbed the Stud Boy Holeshot in both his qualifying rounds and, despite being dealt ninth pick on the start line for the final due to the inverted start procedure, nearly got the holeshot in the final.

The opening laps of the 20-lap final, it was a three-way battle for the lead with Hibbert in third. Riding a blistering fast line through the back rhythm section of the track, he made two clean passes for the lead and immediately opened a gap over second place. He rode the remainder of the race unchallenged to take the win.

Next up for Hibbert is the inaugural Iowa Snocross National at Dubuque’s Sundown Mountain Resort this weekend. For an inside look into his preparations for the final stretch of the season, visit tucker-hibbert.com and connect to his social media channels.

On his results at the Michigan Snocross National: “I’m pretty excited about how the race went in Michigan. Saturday was awesome winning both heats and the main event to maximize our points. I would’ve liked to have done a little better on Friday to help with the points but, overall with the track conditions and the weather, I’m happy with how I felt on the sled.”

On his starts Saturday night: “We worked quite a bit on start testing during the break and did some brainstorming between Friday and Saturday to get better starts. That made a big difference for us Saturday night. The track was small and tight so it was really important for us to get our starts figured out.”